(This section is being expanded)

Here are just a few of the many memorable comments and articles about Marielena’s campaign for the United States Senate:

“Marielena Stuart embodies the perfect conservative storm that Florida citizens need to deliver to our nation’s capital in 2012.”
– The Honorable Robert K. Dornan

“It was a red meat speech and right on the money. We were left feeling that if Marielena Stuart is elected to the Senate, the place will never be the same again. Truly a candidate for the times.” – Palm Beach County Tea Party (Jupiter Chapter)

“Her positions on nearly all the issues that face us today are as true to the Constitution as anyone who has spoken at one of our events. One can see how much of a threat she represents to the Establishment in politics, since she is not shy about how she would reduce power within the Federal Government.”– Palm Beach County Tea Party (Boca Raton Chapter)

“I have had significant time with Marielena to discover the kind of U.S. Senator she would be.  I compare her with the nearest Statesman, President Ronald Reagan.  She is courageous, principled, constitutional, conservative, fair and just– and fearless unto death for the cause of American liberty.  She exemplifies American patriotism as a passionate promoter of faith and freedom.  When elected, I have full confidence she would be a conserver of the American Republic and a preserver of life, property and the pursuit of happiness for everyone.  She inspires, encourages, and exudes the rarecombination of confidence with humility to our Country’s God.   Her position requires reformation, integrity, godliness, honor and truth.  She is not only up for the task, but will motivate other Senators to follow her lead.  The Conservative Talk Network and the Glenn Pav Show soundly endorse Marielena Stuart for the U.S. Senate.”  – Rev. Glenn M. Pav, President / CEO of the Conservative Talk Network

_______
“All I can say is WOW.  Those fifteen minutes were the most meaningful fifteen minutes of my Pinellas County Republican Executive Committee life.  She is thrilling to listen to and she will receive my vote in the primary.”
– Steven D. Lange, Executive Director of Patriots’ Ink“
_______
“Marielena and her exemplary family are political poetry in motion, they are metaphorically like watching the parting of the Red Sea.  Most Florida voters thought we were fated to be forever saddled with Establishmentarian sclerosis.  Fabian Socialism is no longer the fated destiny for our children and grandchildren.  Marielena has amply demonstrated to Florida Republicans that she is the only candidate qualified to win the August 14th Primary.”
– Douglas V. (via Facebook)
_______
“Attended the Miami-Dade REC [Republican Executive Committee] last night…Marielena Stuart was the Star of the Night, bringing REC Members to their feet numerous times for her positions on issues critical to True Conservatives and the TEA Party base. She did the same at the Broward REC June 25th (google it).”
“The M-D REC Membership sure enjoyed what she had to say and several spoke on her behalf calling out “Marielena is the Candidate we should support.” TARP a bad vote??? I think we can all agree on that. Marielena won’t make that kind of MISTAKE. Do us all a favor and stop supporting the establishment candidates. http://www.stuart2012.com“
— Rick Eddins, July 27, 2012

I was at that PCREC meeting [June 11, 2012 Pinellas County Republican Executive Committee Poll, conducted by Supervisor of Elections] and Marielena Stuart was apple pie, Chevrolet and brilliant. She is knowledgeable on world affairs and would beat the socks off the politicians if she would get the exposure she deserves. Standing ovations, foot stomping , clapping and hooting of approval for her points of observation and ideals for a free America. I have never seen a reaction of this group like last night. Never. She will be loved by the people of America.

Floridians should open their ears and hear this woman of integrity! Here’s a taste! Pass it on.
http://soundcloud.com/marielenastuart2012/marielena-stuart-memorial-day

Can we get a REAL CONSERVATIVE elected? I think we can. Here she is America!

I was there [June 11, 2012 Pinellas County Republican Executive Committee Poll, conducted by Supervisor of Elections]. It was an American moment. This was not Tea Party rhetoric, but truth that all of us need to know. Communism, socialism, Agenda 21 are the dangers that face us and if you are not knowledgable, you need to be. This woman was beaten and left for dead by the communists. Truth is the only answer to restore our Constitution. We need to get behind Marielena Stuart and send a REAL PATRIOT to Congress. 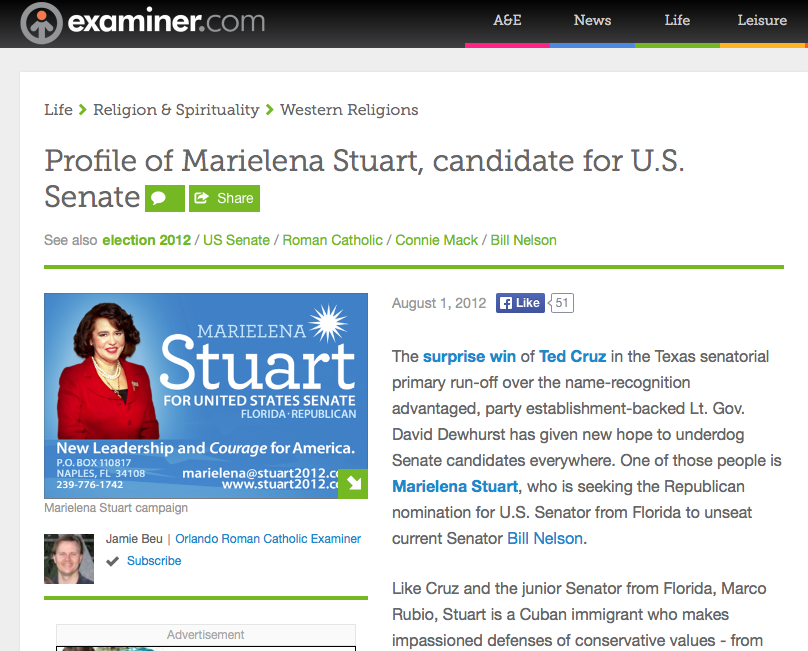 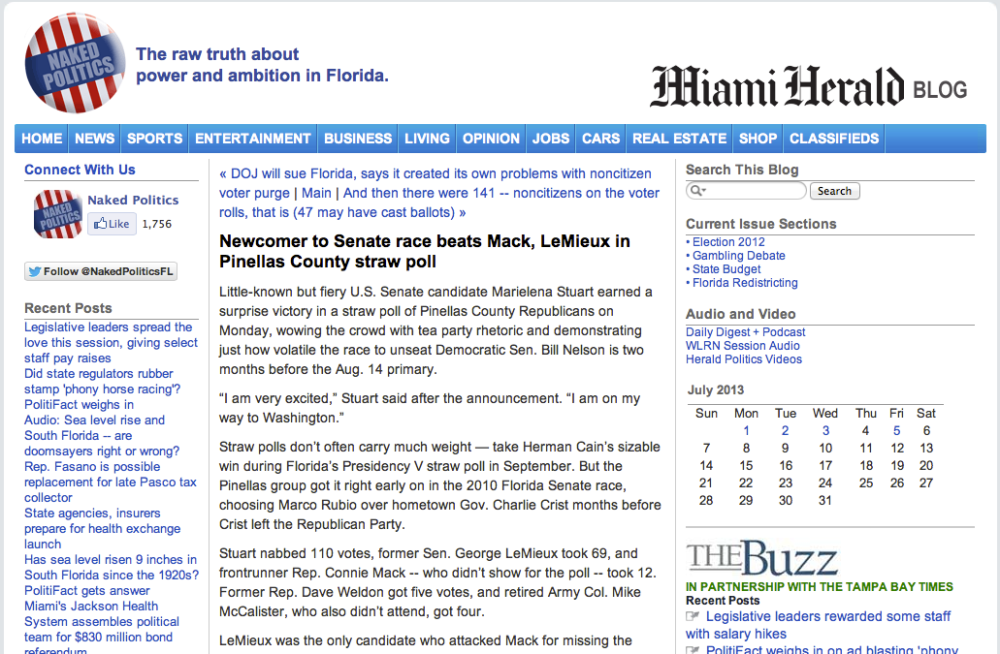 What Ails the U.S. Economy? (LINK)

1.  I came to the United States through the historic Freedom Flights, not in a raft.

2.  Regarding my serious head injuries:  I was denied all medical attention by Castro’s Communist government– and recovered at home under my mother’s care– NOT in a hospital.

Thank you Vicky– for your kindness and coverage of my campaign for the U.S. Senate.

LINK TO VIDEOS AND COMMENTARY

ARCHIVE of MarielenaStuartforUSSenate2012.com
Copyright © Marielena Montesino de Stuart. All rights reserved.
PLEASE NOTE:  Any ads that appear are automatically generated by WordPress.com and are not part of this Archive.
Loading Comments...